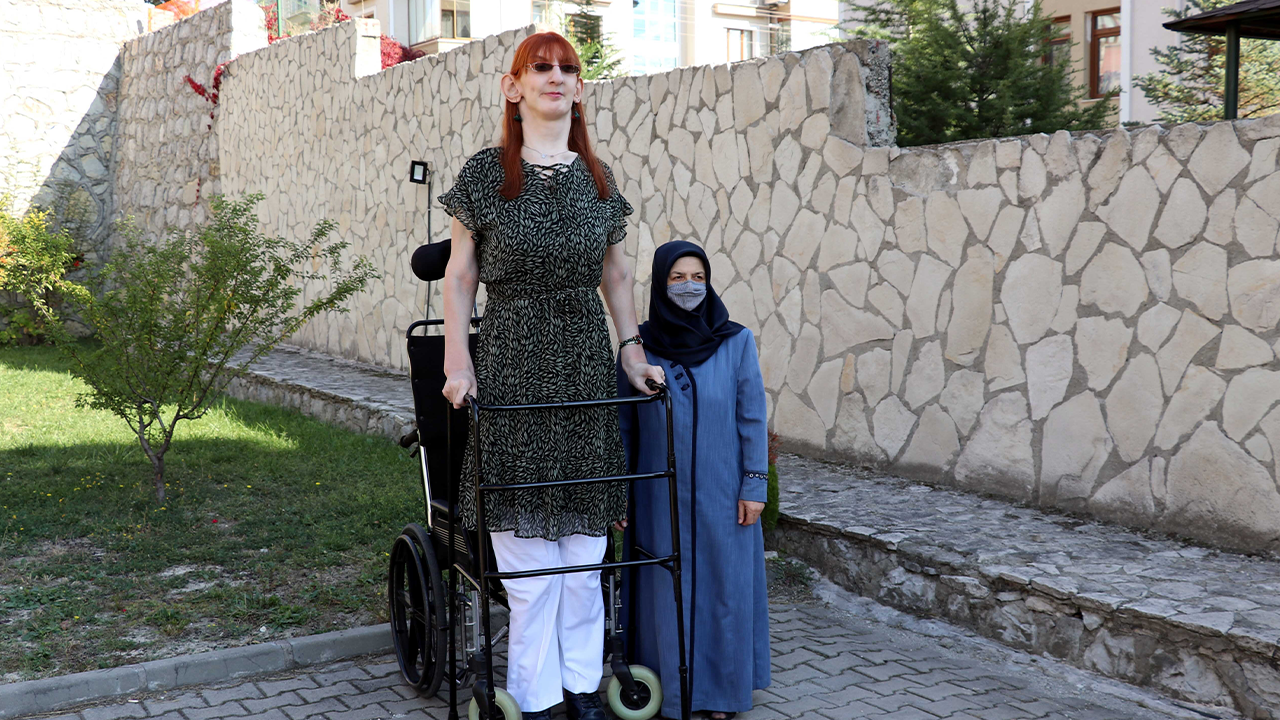 Bradon Marshall is 16 years-old, 7 feet and 4 inches tall and still growing. Meet the world’s tallest teenager as doctors try to learn how someone so young is growing to such dramatic heights.

The world’s tallest woman was able to make her first trip on an airplane after an airline removed six seats.

“This was my first flight, but it certainly won’t be the last. From now on, I will be very honored and happy to fly to different parts of the world with @turkishairlines. A heartfelt thank you to every single person involved in my journey,” Rumeysa Gelgi wrote on Instagram of her flight on Turkish Airlines.

The Turkish woman stands at 7 feet, 0.7 inches tall and had never flown before her ride in September from Istanbul to San Francisco. Photos posted to her Instagram account showed how the airline removed six seats to make room for a stretcher that Gelgi lied on during the flight.

The 25-year-old plans to spend the next six months in the U.S. and has been documenting her time in California on her Instagram account.

Gelgi clinched the Guinness World Records’ title of tallest living woman in 2021 after she was re-measured. She has a condition called Weaver syndrome, which causes bones to grow rapidly and larger than normal.

IGOR VOVKOVINSKIY, TALLEST MAN IN US, DIES IN MINNESOTA

Rumeysa Gelgi who has a standing height of 213.6 cm (7ft 0.09 in) and who has been awarded the title of tallest teenager (female) in the world by Guinness World Records is now being awarded by the title of “The tallest female in the world under the age of 18” by the Assist World Records in Karabuk, Turkey on August 14, 2015. (Photo by Ersin Turan/Anadolu Agency/Getty Images)
(Ersin Turan/Anadolu Agency/Getty Images)

Guinness World Records noted last year that Gelgi relies on a wheelchair to get around, but can walk short distances with the assistance of a walker.

Turkish woman Rumeysa Gelgi (L), who stands 215.16 centimeters (7 feet, 0.7 inches) tall and has been confirmed as the world’s tallest living woman by Guinness World Records, is seen in front of her house in Safranbolu district of Karabuk, Turkey on October 14, 2021. Gelgi’s phenomenal height is due to a condition called Weaver syndrome, which causes accelerated growth and other abnormalities, Guinness World Records said in a statement. (Photo by Orhan Kuzu/Anadolu Agency via Getty Images)
(Orhan Kuzu/Anadolu Agency via Getty Images)

The tallest living man, Sultan Kösen, is also from Turkey and stands at 8 ft 2.82 in.