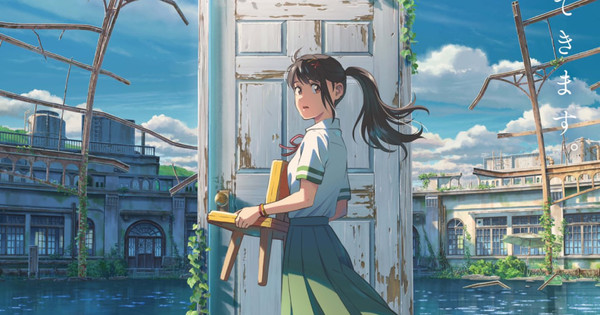 When it comes down to it, Suzume no Tojimari is the story of a girl on a literal journey to overcome her deeply seated trauma—a trauma she shares with a sizable portion of Japan. Suzume is a survivor of the 2011 Tohoku Earthquake. But while she survived, her mother did not. Though she appears to be a typical, happy teen, this is her mask—her barrier against the world. Suzume doesn’t let people in—not her school friends and not even the aunt she’s lived with for a decade. Sure, thanks to the distance she has created, she’ll never be hurt like she was at the loss of her mother, but at the same time, she is unable to truly heal.

Yet, while this deeply seated emotional pain is at the core of this film, it’s a rather optimistic story. Throughout her journey, Suzume is forced to rely on the kindness of total strangers again and again. Each time, they open their homes and hearts to her—despite not knowing each other at all.

At the same time, her connection grows with the chair-ified Souta as he is forced to rely on her to get where they need to go. Fighting supernatural forces that no one else knows about forms a strong bond between the two—one unlike any she has had since her mom’s death. The longer they travel together, the more unwilling she is to lose him. Yet, it doesn’t take a genius to tell that being separated from his body isn’t healthy for him. And all too soon, she is forced to confront loss again—both that of her mother and potentially Souta.

Overall, Suzume no Tojimari follows the same three-act structure used in writer-director Makoto Shinkai‘s other films, your name. and Weathering With You. The first act introduces the supernatural and is filled with a large helping of lighthearted comedy. In the second act, things get increasingly more serious as a significant threat is revealed—and seemingly resolved. The third and final act is then spent dealing with the unforeseen consequences and revelations of the second act—with our hero fighting to regain what has been lost.

While this structure makes for a solid film full of twists and turns, it is also predictable. If you’ve seen your name. and Weathering With You, you know exactly where this film is going at any moment—even if the specifics of the plot are different. This, in turn, blunts the film’s emotional effect somewhat—which is a shame as playing on your emotions is the film’s bread and butter.

But while the film’s framework is the same as Shinkai’s previous offerings, it has one major departure that massively changes how the audience interacts with the film. There’s no real villain in your name. and Weathering With You—unless you consider natural disasters and faceless gods to be villains. Suzume no Tojimari, on the other hand, has its villain in the form of Daijin. And while Daijin may be a cat, the fact that it can be both communicated with and confronted adds a whole extra layer to the story. What is Daijin? Why is it obsessed with Suzume? Why did it turn Souta into a chair? Why is it going to one door after another all over the country? All these questions have concrete answers—well, as long as Daijin deigns to answer anyway. Because of this, Daijin serves to give the plot an extra level of focus. It’s a goal, an antagonist, and a mystery all in one—and one that keeps the story moving whenever things threaten to slow down for too long.

On the visual side of things, there is a brilliant use of light and color throughout Suzume no Tojimari —especially when it comes to the world on the other side of the door with its visual paradox of both sunlight and a star-filled sky. Overall, the film looks just as amazing as you’d expect for a Makoto Shinkai film—with one notable exception. Unlike the other creatures in the film, the eldritch entity Suzume encounters in Tokyo looks decidedly fake in wide shots—like a cheap CG effect placed over the otherwise quality animation and blended poorly. It clashes so severely that it distracts from what should be one of the film’s most important, emotional moments. Luckily, this is the single visual misstep in an otherwise beautifully animated film.

The film’s music likewise lives up to the expectations set by Makoto Shinkai‘s other recent films. Once again, the soundtrack is primarily penned by the band RADWIMPS, though it is more haunting and mystical than the alt-rock they’re famous for. Nowhere is this more obvious than in the film’s main reoccurring song, “Suzume,” which contains mainly strings, piano, and percussion—along with a backup choir acting as an additional instrument to guest singer Toka’s wilting vocals. It’s an earworm if there ever was one and perfectly matches the otherworldly mood of the film.

All in all, Suzume no Tojimari is a fantastic movie. The story has great characters and is laser targeted to make you laugh and cry. Thematically, it is a solid exploration of coming to terms with loss and learning to let people in. The visuals are stunning, and it has the music to match. If there is one downside to the film, however, it follows in the footsteps of its famous siblings your name. and Weathering With You a little too closely—to the point that it makes the film more predictable. That said, it’s hard not to be caught up in this film’s tornado of spectacle and emotion when all is said and done.

The best flannel sheets to keep you warm this winter