Jets brush off camera delay in upset win over Bills: ‘Definitely like a conspiracy theory’ 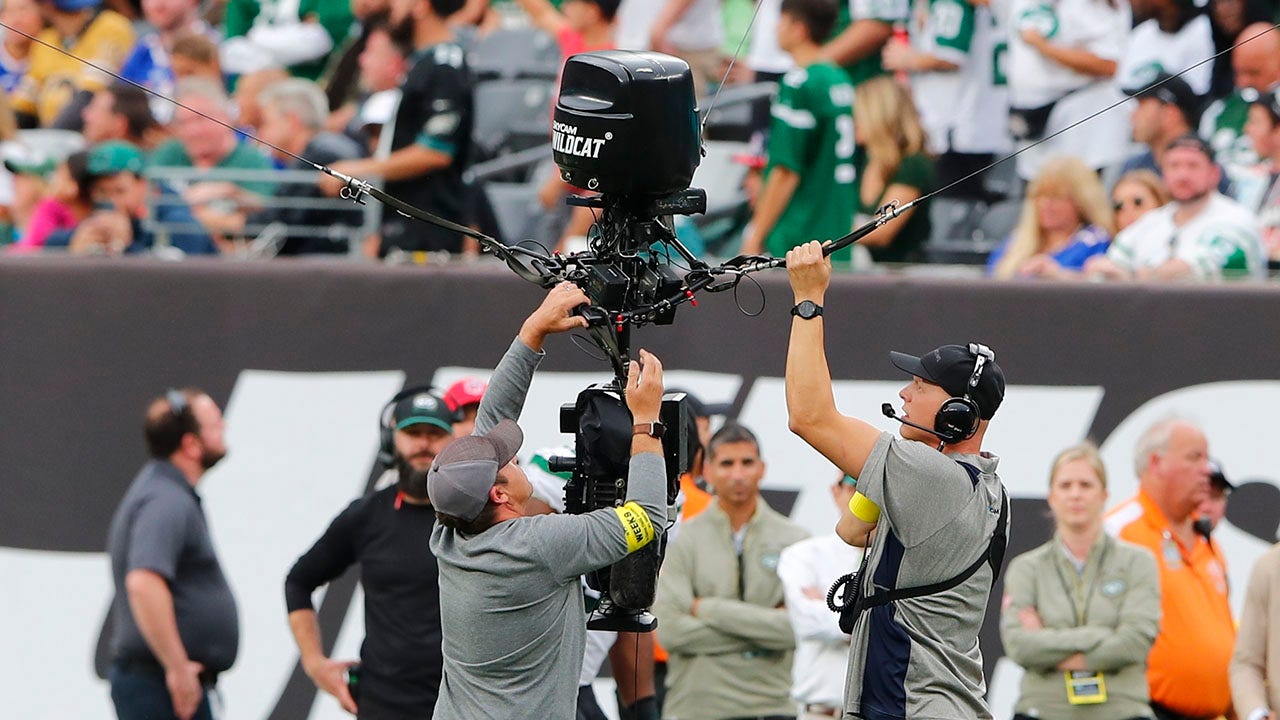 A bizarre moment occurred in the third quarter of Sunday’s game between the New York Jets and Buffalo Bills when one of the wires for the Skycam snapped and left the device dangling.

The incident caused a 12-minute delay, and as soon as the whistle blew for players to return to action, Jets quarterback Zach Wilson fumbled the ball and knocked down New York’s chance of a field goal. However, the Jets would pick off Josh Allen on the Bills’ next drive.

Crews work to repair a Skycam during the second half of a game between the New York Jets and Buffalo Bills at MetLife Stadium on Nov. 6, 2022 in East Rutherford, New Jersey.
(Elsa/Getty Images)

New York would outscore Buffalo 10-3 in the second half and win the game 20-17. Jets coach Robert Saleh was asked about the camera problem and said, “it only happens to the Jets.”

Jets running back Michael Carter joked it was a “conspiracy” against the team.

Workers repair a remote camera during a delay during the second half of an NFL football game between the New York Jets and the Buffalo Bills, Sunday, Nov. 6, 2022, in East Rutherford, New Jersey.
(AP Photo/Noah K. Murray)

“That was weird for sure. Definitely like a conspiracy theory,” he said, via Audacy’s WFAN. “But no, it wasn’t that big of a deal. We were moving the ball, but I don’t want to get too deep.”

Wilson said he had not seen anything like that before, but it was all about moving on after the fumble.

Wilson had 154 yards through the air on his way to picking up one of the biggest wins of his career. He said after the game he and his teammates expected to beat Buffalo.

A New York Jets fan holds up a Serving up Buffalo Burgers sign during the fourth quarter of the National Football League game between the New York Jets and Buffalo Bills on Nov. 6, 2022 at MetLife Stadium in East Rutherford, New Jersey.
(Rich Graessle/Icon Sportswire via Getty Images)

“I mean, it shows we obviously don’t care what anybody says, right,” he said, via the team’s website. “We expected to win this game as a team. And of course, we understand they’re a good team and so are we. So, the mindset is that we should be able to go out there and compete. We knew it was going to be close. We were able to finish in crunch time.”

Share
Facebook
Twitter
Pinterest
WhatsApp
Previous article
NFL legend Michael Irvin has ‘no doubt’ who the Most Improved Player is: ‘It’s not even close’
Next article
Hiiro no Uta Manga Ends on December 6 – News

Giants’ Adoree’ Jackson focuses on the ‘blessings’ amid playoff push: ‘You can’t take these games for granted’