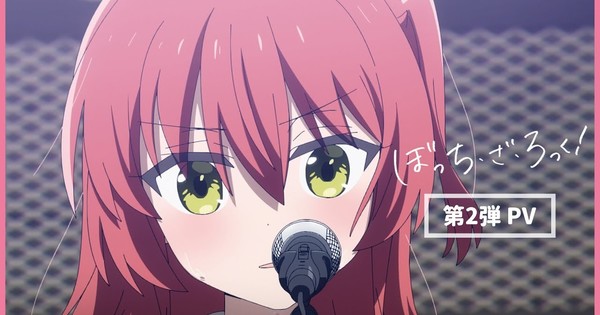 The anime premiered on the Tokyo MX, BS11, Gunma TV, and Tochigi TV channels on October 9, and it also runs on MRT Miyazaki Broadcasting, MBS, RKB Mainichi Broadcasting, and AT-X. Abema streams the anime at the same time as the earliest television broadcast, followed by other services. Crunchyroll is streaming the anime as it airs in Japan.

The manga’s story follows Hitori “Bocchi-chan” (“Loner”) Gotō, a lonely high school girl whose heart lies in her guitar. She does nothing every day except strum her guitar by herself at home. However, she happens one day to meet Nijika Ijichi, who is looking for a guitarist for her group named “Kessoku Band.”

The anime’s “Kessoku Band” with Ikumi Hasegawa (voice of Ikuyo Kita) on vocals is performing the opening and ending songs. Singer-songwriter Ai Higuchi wrote the lyrics, and Otoha, member of the musical group 48foureight, composed the music for the opening song titled “Seishun Complex” (Youth Complex). The KANA-BOON band’s vocalist and guitarist Maguro Taniguchi wrote the lyrics and composed the music for the ending song titled “Distortion!!”

Hamaji launched the manga in Houbunsha‘s Manga Time Kirara Max magazine in December 2017, and the series is ongoing.