Black Clover Mobile: Rise of the Wizard King Game Delayed to 1st Half of 2023 – News 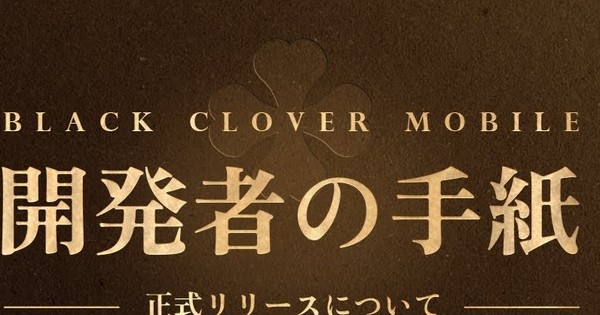 A teaser website for the Black Clover Mobile: Rise of the Wizard King mobile game launched on Sunday, and a video letter from game developer Vic Game Studios’ CEO Choi Jae-Young confirmed that the game will launch worldwide in the first half of 2023. The game will also conduct global closed beta tests in select regions.

(The below video features English subtitles that can be toggled on.)


The teaser website also posted a prologue trailer for the game:

The mobile game will launch for iOS and Android as a free-to-play game with in-app purchases. The game was originally scheduled for worldwide release in 2022, but the game developer decided to delay its release to further improve the game’s quality.

Bandai Namco Entertainment launched the Black Clover Phantom Knights (Black Clover Mugen no Kishidan) smartphone game in Japan in November 2018, and then released the game’s English-language version for Android and iOS devices in January 2020. The game ended service in both languages in December 2020.

The franchise‘s upcoming film, titled Black Clover: Sword of the Wizard King (Black Clover: Mahо̄tei no Ken), will debut worldwide on Netflix and open in theaters in Japan on March 31, 2023.